An overview of events occurring in Northern Ireland, Scotland and England today.

Ceremonial and events guidance following the death of Her Majesty The Queen For Tuesday 13 September 2022.

The following ceremonies and events are taking place on Tuesday 13 September 2022 across the country to allow people to pay tribute to the life of Her Majesty The Queen and mark the Accession of His Majesty King Charles III: 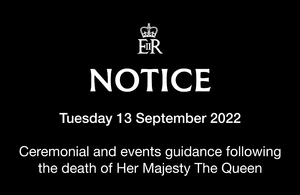 Their Majesties will arrive at Belfast City Airport where they will be met by the Lord Lieutenant for the County Borough of Belfast, the Secretary of State for Northern Ireland and the Chief Executive of Belfast City Airport, before travelling to Hillsborough Castle for a number of engagements.

The King and Queen Consort will arrive at Hillsborough Castle, where His Majesty will hold a private audience with the Secretary of State for Northern Ireland and will meet with representatives from political parties. Their Majesties will also receive a Message of Condolence from The Speaker of The Northern Ireland Assembly on behalf of the people of Northern Ireland.

The King and The Queen Consort will attend a reception at Hillsborough Castle, hosted by the Secretary of State, where they will have the opportunity to meet representatives drawn from a diverse range of Northern Ireland life.

His Majesty The King and Her Majesty The Queen Consort will attend a Service of Reflection for the life of Her Majesty Queen Elizabeth II at St Anne’s Cathedral. Their Majesties will then undertake a walkabout at Writers’ Square before departure.

The coffin of Her Majesty Queen Elizabeth II will depart Edinburgh for Buckingham Palace.

The coffin of Her Majesty Queen Elizabeth II will arrive at Buckingham Palace.

The movement of the coffin into London

At RAF Northolt, the Bearer Party and Guard of Honour will be formed by The Queen’s Colour Squadron (63 Squadron RAF Regiment). The Bearer Party will convey the Coffin to the State Hearse.

The Guard of Honour will present arms on the arrival of the Coffin and remain in that position until the State Hearse has departed the airfield.

The State Hearse will then convey the Coffin to Buckingham Palace. The route will be:

The Department for Digital, Culture, Media and Sport has published guidance for the public on the queue processes for those wishing to witness the Lying-in-State, available here.

Public information on the arrangements following the death of Her Majesty Queen Elizabeth II will continue to be posted on gov.uk here.

Further information on commemoration events, including across the UK, will be provided in future updates.

We use cookies on our website to give you the most relevant experience by remembering your preferences and repeat visits. By clicking “Accept All”, you consent to the use of ALL the cookies. However, you may visit "Cookie Settings" to provide a controlled consent.
Cookie SettingsAccept All
Manage consent

This website uses cookies to improve your experience while you navigate through the website. Out of these, the cookies that are categorized as necessary are stored on your browser as they are essential for the working of basic functionalities of the website. We also use third-party cookies that help us analyze and understand how you use this website. These cookies will be stored in your browser only with your consent. You also have the option to opt-out of these cookies. But opting out of some of these cookies may affect your browsing experience.
Necessary Always Enabled
Necessary cookies are absolutely essential for the website to function properly. These cookies ensure basic functionalities and security features of the website, anonymously.
Functional
Functional cookies help to perform certain functionalities like sharing the content of the website on social media platforms, collect feedbacks, and other third-party features.
Performance
Performance cookies are used to understand and analyze the key performance indexes of the website which helps in delivering a better user experience for the visitors.
Analytics
Analytical cookies are used to understand how visitors interact with the website. These cookies help provide information on metrics the number of visitors, bounce rate, traffic source, etc.
Advertisement
Advertisement cookies are used to provide visitors with relevant ads and marketing campaigns. These cookies track visitors across websites and collect information to provide customized ads.
Others
Other uncategorized cookies are those that are being analyzed and have not been classified into a category as yet.
SAVE & ACCEPT